A reflection for the first Sunday in Advent – written for the online service from St Peter’s church, Bramley

Christ has accepted you. So accept one another in order to bring praise to God.

I tell you that Christ has become a servant of the Jews. He teaches us that God is true. He shows us that God will keep the promises he made to the founders of our nation.  Jesus became a servant of the Jews so that people who are not Jews could give glory to God for his mercy. It is written, “I will praise you among those who aren’t Jews. I will sing praises to you.” Again it says, “You non-Jews, be full of joy. Be joyful together with God’s people.” And again it says, “All you non-Jews, praise the Lord. All you nations, sing praises to him.” And Isaiah says, “The Root of Jesse will grow up quickly. He will rule over the nations. Those who aren’t Jews will put their hope in him.”

Today is the first day of Advent, the season when we prepare to welcome Jesus. Our parish has a one-word theme each week, and this week’s word is HOPE. Hope, in the way the way Christians use the word, is more than just wishful thinking, it’s trusting that God has a plan for our lives and that his promises of restoration and rebuilding will come true.

At the start of Advent the Church looks back to a time before Jesus, when God’s people were without hope. They were living in exile, separated from family and unable to communicate with them, grieving for those who had been killed in war, unable to do their usual jobs.   Doesn’t that sound familiar, as we spend this advent still reeling from the effects of the virus?

Like them, we may feel we have nothing to hope for. But God sent prophets with a message of hope, that he would rescue his people and take them back to where they belonged, restoring relationships and building communities.

The words of the prophets did come true – God restored the Jews to their land.  But there was more, a greater hope that God would one day come himself to reconcile his people – not only the Jews, but all people on earth, even those most excluded from society.  That’s why in this reading St Paul tells his readers to “accept one another” or in other translations, “welcome each other”– he was talking to Jewish and non-Jewish Christians, but the same applies wherever there is division in society.

This call to welcome others is especially relevant today, when we see so much division, so much inequality, so much discrimination in our world.  Never forget, Paul says, that God’s promise of hope is to all people, but most of all to the excluded. 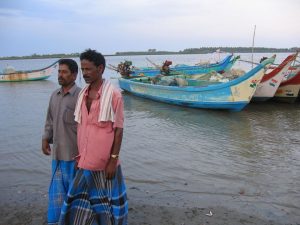 What does this look like in practice?  Take these fishermen. They live in a village called MGR Thittu in Tamil Nadu, south India which we visited in 20o6 with Tearfund.  They are Dalits, those below the bottom tier of the caste system.  They were cut off from society, poor, despised, uneducated, unable to work in the towns. Then the 2004 tsunami hit them, destroyed their boats and their homes.  They had no hope.  But Indian Christians from an organisation called EFICOR (with financial support from Tearfund in the UK), and Christian Aid, came to their rescue with a practical message of hope.  They built new homes, gave them new boats, and opened a computer teaching centre so that they could learn to use the Internet, get jobs in the city and become part of mainstream society. Above all, the Christians brought a message of God’s unconditional love.  Several of the Dalits turned to Christ and now there is a local church in their village.

[Postscript: since I drafted this earlier this week, Tearfund have asked for prayer for the Tamil Nadu region as it has been hit by a severe cyclone, with large numbers of people evacuated from the coastal areas.  Pray that once again, they may be given hope for the future].