If this is your first viewing, please see my Introduction before reading this, and also my introduction to the Proverbs. 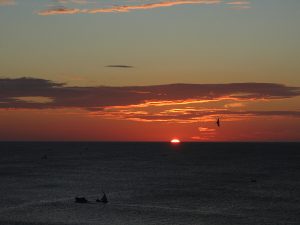 From these chapters I will pick only one verse (4:18): “The path of the righteous is like the morning sun, shining ever brighter till the full light of day” (NIV translation).

The main reason for picking this verse is that it reminds me of a trip to India eleven years ago, to see the work of the Christian development charity Tearfund and their Indian partners EFICOR and ESAF. For part of our time there we stayed in a hotel on the very southernmost tip of the continent, where you could see the sun rise in the east and set in the west from the same point.  This photo was taken from the hotel bedroom at dawn (about 6am), and the dawn was marked by loud worship from both the Hindu temple and the Catholic church nearby.

Offering praise to God at the start of the day is common to most religions. While a scientist may prosaically say that the earth is simply rotating on its axis so that the sun comes into view each morning, the idea of the rising sun banishing the darkness of evil and heralding the coming of God’s goodness and protection – what we might call a sacramental view of cosmology – is a common one.  Similarly, right living is compared to living in the light, and sinfulness to walking in darkness.

In the original context of this verse, the “way of the righteous” is contrasted with the “way of the wicked which is deep darkness”.  In other words, the more you live according to the way of wisdom, following the ethical teachings of your religion, and living honestly and openly, the clearer you will see the world; whereas if you get enticed into sin and crime, which naturally lead to secrecy, fraud and lies, the world will become dark to you and you will lose your moral compass.  In that context, the dawning of the sun is like the moment of conversion when you realise that following Christ (who called himself the “light of the world”) is the only way to a life lived in the full light of day.

The work of ESAF (Evangelical Social Action Forum), and other Christian agencies in the region including the Salvation Army, that we saw included working in local villages with fishermen and coconut growers who had lost their livelihood as a result of the 2004 tsunami; provision of clothing, food and medical treatment for homeless people; reconstruction of damaged houses and building new ones; supporting “Sangrams” (self help groups”; and starting an orphanage and Sunday schools. They also ran a micro enterprise scheme which offers insurance, a savings bank and capital investments for income generation projects.  All this was truly bringing light into the darkness of some of the poorest people of India.