Four years ago, in 2017, I set myself the task, which I completed, of reading through the Bible in a year.  You can read my thoughts on each day’s section in the archives of my blog.

For 2021 I have set myself a different challenge, to sing my way through a hymn book.  Why?  Several people recently, in the media and in church sermons, have commented that the Covid-19 pandemic, depriving us of most opportunities to hear live music or participate in singing, has also deprived us of something essential to our humanity.   Song, in its many forms, is at the heart of every culture.

It is particularly important in the Jewish-Christian religious tradition (with a few exceptions such as the Quakers who worship in silence).   St Paul tells his readers to “sing psalms, hymns and spiritual songs”. This covers very succinctly the use of musical versions of the Psalms to express the full range of human emotions, settings of the creeds and liturgies of the church (hymns), and celebrating the love of God (spiritual songs).  This was expressed more fully and very eloquently by the Revd Keith Fraser-Smith, in his sermon for the first Sunday of Christmas at Christ Church, Upper Armley in Leeds.  You can watch it on the church’s Facebook page at https://tinyurl.com/y7op7wpw – start 13 minutes into the service for the sermon. Without these opportunities for collective worship in song, I have felt dissatisfied with my spiritual life in 2020.

So, for 2021, starting as it does with a continued and indefinite ban on congregational singing, I will at least sing one hymn or song per day at home, and I will share some brief thoughts on these in subsequent blog posts.  Of the several hymn books on my shelf, I have chosen “Sing Praise” (published by Hymns Ancient & Modern Ltd in 2010 – available from their website singpraise.hymnsam.co.uk ).  It has a good range of new songs and hymns, many of which I haven’t tried yet, along with some old favourites, and about half of them are themed to the seasons of the church year as observed by Catholic and Anglican churches. The number in the book (329) is close enough to 365 to allow for a different hymn nearly every day.

The principles I have observed in fitting these 329 songs to the calendar for 2021 are as follows:

If you’ve read so far, I hope you can join me for the rest of the year as we sing our way through 2021.

Today is the third Sunday of Advent.  In the parish of Bramley we have a one-word theme each week during Advent. So far we have had HOPE and PEACE. This week’s word is FAITH.

What does that mean to you? People can sometimes be put off  getting involved with Christianity because we talk of faith, thinking that faith means already understanding the Bible, or believing certain things about God.  But all that can come later.  Faith, to begin with, simply means trusting God – just trusting that he exists, and that he cares.

Isaiah spoke to people who thought God was ignoring them in their problems.  No, he said, God understands everything. You just need to trust him, then you can be as strong and free as the eagle, in other words you will find the strength to cope with your problems and feel in control of your life, rather than being earthbound by your problems and other people’s expectations. 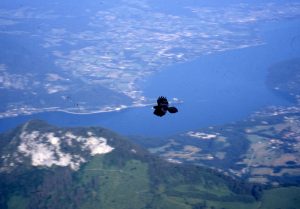 Let’s look at a couple of pictures.  The first is a photograph of a bird – actually it’s a chough, a sort of large crow, not an eagle – but it is flying high above a lake.  My friends and I had spent hours climbing the mountain by our own effort, fighting against gravity, but here was this bird just soaring easily on the thermal currents.   I took this at a time when I had been a Christian for over ten years but was exploring options for ministry. This view from a mountain top spoke to me, of the way God might be freeing me from previous commitments to serve him. 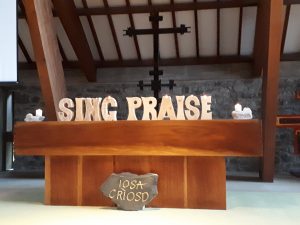 The second image is of a place some of you may know, the chapel at Scargill House. About five years after I had taken the first photo, praying in the silence of the chapel in the Yorkshire Dales, God gave me a picture in my mind, in which I was a baby bird, and God my mother. She was telling me it was time to fly the nest, not to be afraid but to trust her to know that now was the time to start flying. Within months of that I had given up my previous job, taken a big cut in income and started serving God in a new way in a new place. Since then I have worked for four different Christian organisations and trained as a Reader.

The point is that you don’t need the gifts of a prophet, the intellect of a bishop, or the wingspan of an eagle to start flying with God.  An amount of faith and trust as small as the tiny wings of a baby sparrow will do.  The question is, do you trust God when she says that she knows better than you do what you are capable of, and that you are now ready to fly with her?  It’s only the start of a lifetime’s journey, but it has to start with that simple act of faith.